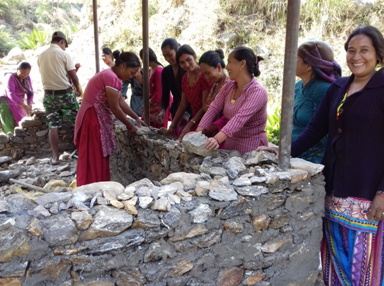 Mrs. Bimala Shrestha was at her local shop when the ground suddenly starting shaking. She hurriedly came out of her shop and gathered at an open place with her husband who was in the shop with her at the very time. “I felt as if the day to die had come. I had in the mind that my house would certainly be flattened by the shake. I was more worried about my children who were in Kathmandu for their studies”, says Mrs. Shrestha. With the quake subsiding for a few moments, she rushed into her house to collect her important belongings, called her children immediately who she found were safe. Then the family prepared a makeshift shelter to live in. Thankfully, her house sustained no massive damage except for minor cracks unlike her neighbors who had their houses completely flattened and reduced to rubbles.

Mrs. Shrestha is the treasurer of the mother groups of ward 7 Ramati. With rounds of relief materials and CGI sheets heading to other VDC pass by her village, she reported that the people in Samundratar VDC had no hope of receiving any support. Later, she learnt from some local that Karuna Foundation Nepal, with the kind support from GIZ, would be supporting the people in her village with CGI sheets. She already had the idea in her mind to take this opportunity to request for some support so that the Ramapti mother groups could accomplish their long standing vision of establishing a building for mothers group. The dream of the group turned into reality when they were able enough to liaise with the Local Disaster Response Committee to decide the support fall in their part.

The mother groups signed a Memorandum of Understanding with Karuna Foundation Nepal to undertake the project and received financial support of two hundred thousand Nepali rupees whereby the whole construction process was led by the group itself. The inspiring aspect of this community led project lies in the fact that every member of the groups actively participated in hauling of local resources like stones, sand and also co-funded from the groups’ fund. Another equally encouraging aspect of this project is that the land was provided by a social worker cum school teacher, Mr. Murari Thapa, a resident of the same ward.  The group is now happy to see their own community building coming up. “We had this dream since a long time back. The dream has finally come true. We would like to acknowledge the support from Karuna Foundation Nepal who worked with funding support from GIZ”, says a member who among many was seen busy helping the masons with the construction.

The mother group also has a plan to build a temple near the building presently at the stage of completion. They already have two bundles of CGI sheets received under the project. The project team from KFN was glad to see the resilience of the groups and the locals which was not deterred by the 25th April earthquake.

Mother and daughter sharing their story