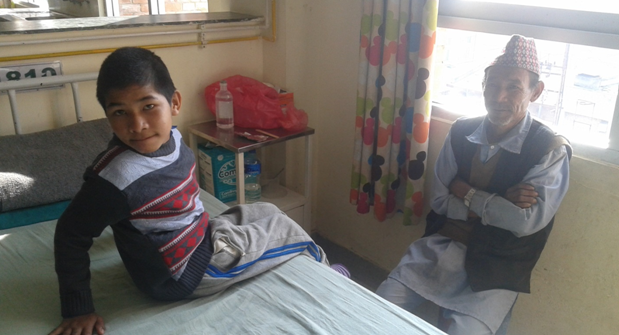 Divendra Rumba with his father at TUTH, time just before his discharge from TUTH hospital, Kathmandu

Devindra Rumba (12 years old), the youngest son of Surjaya Bahadur Rumba and Kanchi Maya Rumba hails from Aamvanjyang Village Development Committee of Makwanpur district. Born and raised in a family with the parents, two brothers and two sisters, the child has two sisters-in-law and two cousins. He was born to the second wife of his father who married twice. His mother was in her mid-forties the moment she gave birth to the boy. Having completed standard two, the child could not continue his education due to an illness he developed.

The child came down with a skin infection that lasted for one month that was then followed by seizure attacks since a year from now. Living in a countryside means you are entangled with lots of prejudices, hence the family availed some traditional treatments including Ayurveda. Coming from the poor family background with agriculture and daily labor as sources of income, the family did not seek any treatment from hospitals then. In addition, no different from other families in the village, the family experienced a partial damaged to the house while their agricultural land got covered by rubbles from a landslide. The child came in contact with the social mobilizer of Karuna Foundation Nepal in the mid November, 2015 under the post-earthquake rehabilitation project of persons with disabilities funded by Netherlands Leprosy Relief. The contact was established by National Federation of the Disabled Nepal-NFDN, Makwanpur District Chapter.

The child was brought to Kanti Children Hospital by the team member of KFN for his necessary treatment. With an episode of seizure during the course of physiotherapy, he was then transferred to ICU of TUTH where he received a week long treatment. The ultimate diagnosis of the child condition was termed “Left Hemiparesis with seizure” by the doctor at TUTH. The child has been advised to take a life-long medication. KFN supported all the cost of treatment including the cost incurred for travel, accommodation and other related costs. For the moment, the child has travelled back home with medicines for three months bought by KFN.

The father of the child thanked KFN and the funding partner for all the arrangements and efforts put forward to treat his child. He said that he would be in close contact with the KFN team member for any support needed in relation to the treatment of the child. KFN plans to explore if the medications prescribed by the doctor could be received free of cost from the government’s free health care system. At the same time, KFN is equally weighing ways that the family could be supported with to increase their income so that they could finance the life-long medication of the child by themselves. On the other hand, with initial level of counseling for the father of the child, KFN is following up with the family to get the child back to school.

Mother and daughter sharing their story